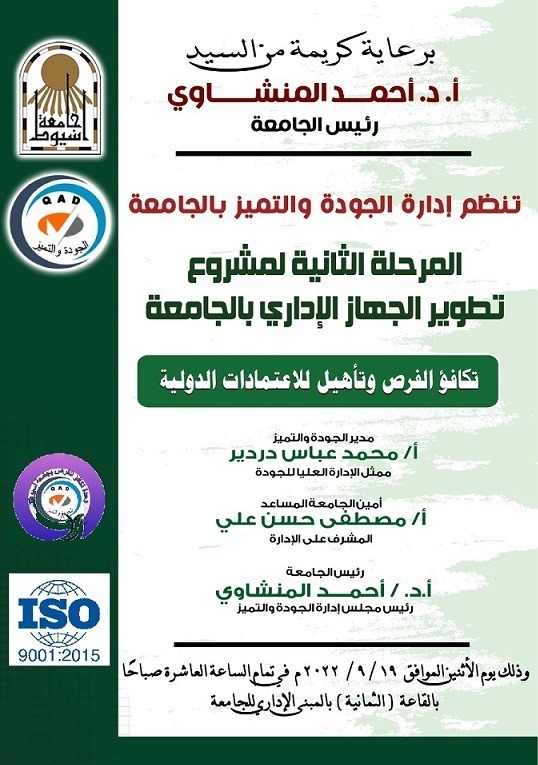 Dr. Ahmed El Minshawy, Acting President of Assiut University, tomorrow, Monday, 19th September, convenes the proceedings of the twelfth conference of the Department of Otolaryngology, which is scheduled to be held in the conference hall in the administrative building, in the presence of Dr. Alaa Attia, Dean of the Faculty of Medicine and Chairman of the Board of Directors of Assiut University Hospitals, and Dr. Youssef Saleh, Vice Dean for Graduate Studies and Research Affairs, Dr. Ahmed Abu Al Wafa, Head of the Department and Conference President, and Dr. Ahmed Abdel Alim, Honorary Chairman of the Conference, which is scheduled to include a number of scientific sessions to discuss all that is new in the specialization of Otolaryngology.
Dr. Ahmed El Minshawy also reveals the inauguration of the second phase of the university’s administrative system development project, which includes rehabilitation of 14 faculties and 13 public and sub-administrations to obtain the ISO 9001 of 2015.
Assiut University President states that the second phase of the project to develop the university's administrative system comes in line with Egypt's strategy for sustainable development (Egypt Vision 2030) and government excellence standards, which is also scheduled to include the launch of the work of the Unit for Equal Opportunities and Empowerment of Women and People with Special Needs, affiliate to the Quality and Excellence Department to raise efficiency of the university's administrative system.